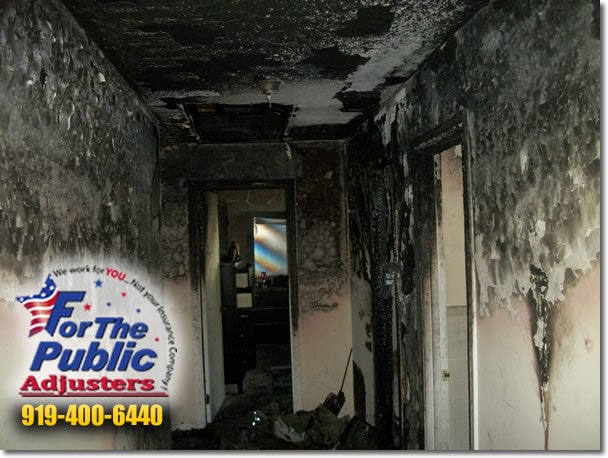 Fire Claim – Jacksonville, NC USA: Mrs. M. Horta, a Marine from Jacksonville, NC had a house fire that cause serious damage that originated from a faulty thermostat. The insurance company did not visit her home or send a licensed adjuster to inspect the fire claim damages. Instead, her insurance company sent out one of their “Preferred Contractors” to provide a damage estimate for them.

Belfor Restoration visited the property and provided the insurance company with an estimate of damage for $92,000. A friend of Mrs. Horta advised she should get a second opinion from a Public Adjuster. When interviewed, Mrs. Horta stated, “I didn’t even know what a Public Adjuster was – or that such a service even existed.”


After speaking with 3 Public Adjusting Companies in NC – and some time considering who to hire, Mrs. Horta chose For the Public Adjusters, Inc. “I chose FTPA because they had good online reviews and I they really seemed to connect with my concerns,” Horta said.

“It was overwhelming with the whole process and was not expecting the attention to detail that my adjusters provided. I didn’t know that much went into it because the Belfor contractor was there for about an hour. But, my adjusters had two people there for about 5 hours,” explained the Marine.

After submitting a detailed scope of fire claim damages, detailed photos captured during their inspection, and a detailed repair estimate with a list of all the covered fire claim damages Belfor Restoration failed to include, the insurance company had no choice but to listen and consider what the licensed public adjusters were saying. “It was not hard to point out that the representatives from Belfor were NOT licensed adjusters. In fact, they were very unaware of what should have been covered under the policy,” said, Brian Thomas, a licensed Public Adjuster with the firm.

After much back-n-forth negotiations, Horta’s insurance company agreed to For The Public Adjuster’s valuation of the fire claim damage. The dwelling portion of the claim was settled for the full limits of the policy, in excess of $216,000. That is an increase of $124,000 (+134.78%)

Mrs. Horta stated, “I was so pleased I found this company to assist me. I would have been screwed if I didn’t get help for my damage. It’s shocking that my public adjuster could more than double my claim. I’m so thankful, you have no idea.”

Horta was so thankful that she posted an online review about For The Public Adjusters services. Horta advised, “I wanted to do what I could to let others know such a service and assistance for homeowners was available.” Below is her online review: (see actual online review here)

Mrs. Horta has fully completed her repairs and is back in her home – for which she is thankful. We as United States citizens are thankful for her, and all other military personnel, past and preset, for their service to us and this great country.