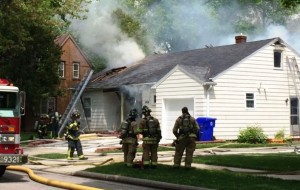 Homeowners Insurance Fire Claim Help North Carolina, NC — You as a homeowners pay good money to protect your property. Of course you insure your property in the hopes that you never suffer any type of insurance claim. However, when an unfortunate disaster like a house fire does strike, you would expect your insurance company to stand by you. When FOX 11 Investigates did some research they found that many property owners had to fight to recover the settlement they knew they were owed.

Homeowner, Amanda Wood, suffered a house fire when her contractor’s torch ignited a fire in the Spring of 2015, according to the local fire Chief. Fire officials believe that smoldering embers flowed across the attic, igniting the flame.

Local FOX 11 News was the first to report the fire and damage to the home.

“I found out from the FOX 11 report was the first time I heard the estimated damage which they put at $100,000 at the time,” said Mrs. Wood.

FOX 11 News admitted they are no fire damage claim experts and that was merely a guesstimate on their part while reporting the story. Mrs. Wood was soon to find out that the actual costs would be much greater than expected.

After Wood’s insurer, American Family Insurance, assessed her fire damage, the smoke the fire generated and the ensuing water damage throughout her 3-bedroom home, Wood told FOX 11 Investigates that her insurer stated she needed to first pay out of pocket for the asbestos found in her older home. Such removal was estimated between $8,000 to $11,000.

American Family sent an email to Mrs. Wood advising that these funds were needed to first remove the asbestos found in the home before any fire damage repairs could begin. However, the claim manager later indicated that the removal of asbestos was not covered under her homeowner’s policy.

When interviewed, a spokesperson for American Family tells FOX 11, its adjusting staff was properly “following procedure.”

“I was shocked because I didn’t start my house on fire so I couldn’t figure out why I had to take $11,000 of my own money to get the process started,” says Mrs. Wood.

Wood also stated that her insurance adjuster advised her that there are tens-of-thousands of dollars in repairs from the house fire that are not covered by her homeowner’s policy. Emails between the parties show that Wood’s claims adjuster claims there were “pre-existing conditions” that would be excluded from coverage. Wood says she was devastated, frustrated, and very confused. As most people in this situation, Wood was under the impression that she was covered by her homeowner’s policy. (And, she was. Did her insurance adjuster make improper claim decisions? Yes, keep reading.)

Fox 11 Investigates asked Wood, “Were you feeling victimized at that point?”

“Absolutely, I do, and that’s why I think it’s so important to get the word out to everybody. Know your policy,” replied Wood.

A written statement from American Family Insurance to FOX 11 stated, “We pride ourselves on working with every customer to help them understand the claim process.”

Fortunately, Wood decided to fight back. She turned a Public Adjuster for assistance and sought an expert in understanding the insurance policy jargon and fire damage repairs.

The Public Adjusting Team valued all damages including the flames and char from the fire, the heavy toxic smoke, and the water damage caused by firefighters to extinguish the fire. From the detailed report the local Chief Building Inspector deemed Wood’s home as uninhabitable and ordered to have the home torn down. As a result of the Public Adjusters detailed report and decision by the city the negotiations with American Family led to a claim settlement for well over $260,000. This far exceeded Mrs. Wood’s policy limits.

With the insurance company’s efforts to minimize their payment of the claim and the lengthy negotiations the claim settlement process took over 9 months. To top it off, because the home was torn down, Mrs. Wood was not required to pay for any asbestos abatement.

“Without proper representation there may be some additional coverages or things you may not understand you’re entitled to in order to rebuild or repair your property,” said Wood.

“I’m grateful there is such a service like Public Adjusters. No one ever talks about it.”

Wood’s insurance company, American Family, declined an on-camera interview with FOX 11 Investigates, but in a statement said, “We are always willing to consider new information and if needed adjust our approach for the customer, which is what we did in this situation.”

“Have there been people who probably should have received more money but didn’t know they could take it a step further?” FOX 11 Investigates asked Mrs. Wood’s Public Adjuster, David Miller. “Yes,” confirmed Miller.

Even when we asked another Public Adjusting firm the same question we heard the same results.

“We get calls all the time where people are frustrated in dealing with their insurance company. Most claims we get involved with people don’t realize how much more they’re claim should have paid and how much more they are entitled to under their policy”, explained Dwight Short, with For The Public Adjusters, Inc.

Mr. Short experienced the same situation when his building caught fire. He stated that his insurance company suggested a low-ball offer on his claim as well for his fire damage. Short and his wife Andrea knew better as they were owners of a construction company at the  time of the fire.

Short stated, “I felt compelled to help fire victims after the ordeal I went through, myself.” “My wife and I had to hire a Public Adjuster ourselves to obtain what we deserved.”

Short advises not to be fooled for a minute and not to single out American Family Insurance, “They all do it this way,” says Mr. Short. “We are IICRC Certified in Fire Damage Restoration, yet, the adjusters require no such training. Why is that? I’ll tell you why. The insurance companies know if their adjusters are properly trained it will cost them double or triple of what they are paying in claims now”, explains Short.

The North Carolina department of Insurance confirms that the most common complaint from NC  policyholders is about the low-ball settlement offers from insurance companies.

“The mindset of the insurance companies is simple, they want to payout the least amount on  the claim they can,” said Short.

FOX 11 Investigates specifically asked, “How many claims as a private adjuster did you actually increase the payout over what the insurance company claimed they owed?” FOX 11 asked.

When asked for this article, Short replied the same as Miller, “I’d say 100 percent.”

Amanda Wood said she knows that securing a public adjuster was well worth it. And her message to other homeowners, “Go home and read through your policy and see how much you’re  confused about, because there’s a lot in there that could easily be swung two different ways,” said Wood.

Are you required to hire a public adjuster? No. However, the real question is should you attempt to battle a claim without one? if you’re able to articulate the attorney jargon of your insurance policy, and if you have the full time job and patience to deal with your insurance adjuster, then go for it.

Some people hire attorneys. However, in most cases attorneys simply turn around and hire a public adjuster or claims expert to generate the claim for them. public adjusting fees are usually half of what an attorney will charge.

The North Carolina Department of Insurance has a Consumer’s Guide to Homeowners Insurance that can be helpful in understanding the insurance claim settlement process. Homeowners insurance fire claims and fire damage are not to be taken lightly. Educate yourself and obtain a FREE Fire Claim Audit so you know where you stand.